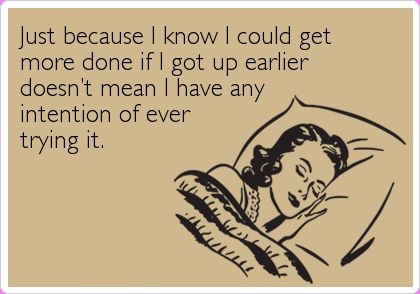 I have never been a morning person. My mum says that she could hoover around my cot when I was a baby and I wouldn’t wake up. At university I could sometimes stay in bed all morning. It was bliss. People told me that I was wasting the day but for me just laying in bed was a great way to spend the day.

I knew that when baby boy came along that I would have to start getting up early. It would just be something that had to be done and I figured that I would get used to it. The problem is that I haven’t gotten used to it. I still hate mornings! I still have to drag myself out of bed and drink copious amounts of tea and coffee to face the day. I feel sorry for baby boy sometimes. He likes to wake up anytime between 4.30 and 6.30 (as well a few times before that in the night). If it before 6 I will usually bring him into bed with me and Mr K which does the trick and he will go back to sleep for a bit. After 6 though there is no chance and it is officially play time. It must be hard for him having a mummy who does a great zombie impression before at least 9am.

Now you would think that not being an early bird would make me a night owl. Wrong! I am usually in bed before 10 on most evenings.

What can I say… I just love my bed!

Are you an early bird or a night owl?