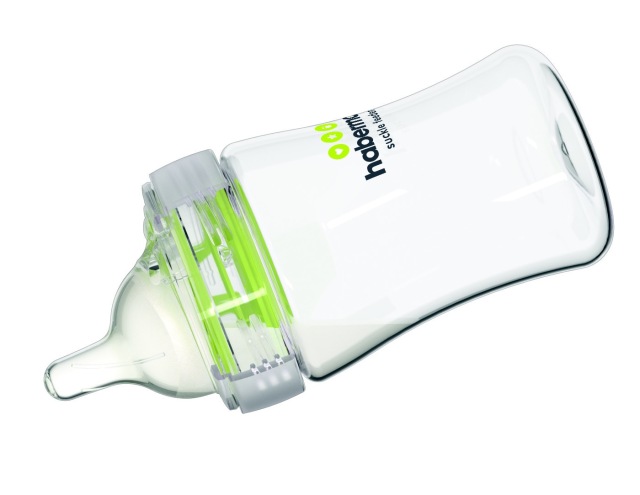 When baby boy was a newborn he suffered terribly with colic and wind. Breastfeeding hadn’t worked out for us and bottle feeding wasn’t going much better. Baby boy would cough, splutter and dribble so much milk that we would often have to change his clothes after a feed. Within half an hour he would be in visible pain. We later found out that he was suffering from silent reflux alongside the colic!

It was at the Baby and Toddler Show at Event City in Manchester that we found a solution to our feeding problem. I was walking past the Haberman stand and caught the end of a demonstration. The demonstrator was showing a young woman a bottle. It didn’t look like any other bottle I had seen before. It was a Haberman Suckle Feeder and with its curvy lines and bright green detailing it looked slightly space age. I was intrigued and wondered what was so amazing about this bottle. The answer was impressive and so I bought 6 of them.

The Haberman Suckle Feeder has an innovative design that uses a closed teat. This means that once milk enters the teat it does not flow back into the bottle unless it is released back in by you and so the teat stays full at any angle. This meant that baby boy could be fed in a more upright position which helped him to feed more comfortably. The closed teat system is also good for reducing wind and colic by ensuring that air bubbles are filtered back into the bottle. The really good thing about the Haberman Suckle Feeder though is the way in which is encourages a baby to feed.

Baby boy had to use his jaw, tongue and mouth to actually suckle the teat to get the milk. This meant that he could stop and rest when he wanted without his mouth still being flooded with milk. Unless he was suckling no milk came out. I could hold the bottle upside down and not a drip would escape! It is this technology that makes it perfect for parents who want to combine breast and bottle feeding (be that expressed milk or formula). Babies do not have to learn a new way of feeding. They use the same suckle action as they do on the breast. The bottle also allows for the flow of milk to be varied just by turning the bottle. No need for different sized teats! If you want Dad to share the feeding without confusing baby then this could be the bottle for you.

From the first use of this bottle we noticed a huge improvement in baby boys feeding. He no longer coughed and spluttered because he was in control of his feeding. It was a lifesaver.

Baby boy is now no longer using bottles but I would have no hesitation buying these again in the future if I needed to.

All thoughts and opinions in this post are my own.

One thought on “Sharing the feeding – Haberman Suckle Feeder *Review”