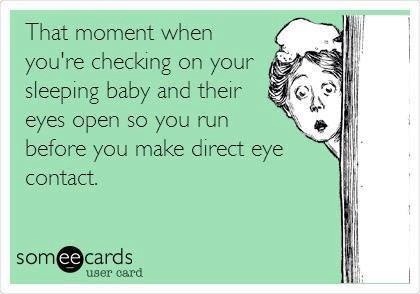 In just over 6 months baby boy has slept through (not woken at all) once. I’m not complaining though because mostly he sleeps very well, only waking a few times a night for his dummy. He hasn’t needed a night feed since he was roughly 3 months old. When he does wake up I try to be firm. I give him his dummy, cover him with his blanket and leave the room. I want him to learn to settle back to sleep on his own. I don’t leave him crying but I try not to pick him up. If Mr K goes in to him however it can be a different story. Sometimes he will do the same as me but other times he will just bring baby boy into bed with us, a sure fire way of him going back to sleep!

This letting baby boy sleep with us started a few weeks after he was born. He wasn’t a good sleeper at all (to be expected I know) and sleep deprivation was slowly killing us! We would take it in turns to sleep but even that was starting to fail as baby boy’s cries could keep a hibernating bear awake! One night we were both exhausted, so much so that I fell asleep whilst giving baby boy his bottle. Mr K took him off me and lay him in bed between us. That night we all slept for a solid block of time. It was amazing! I couldn’t help feeling guilty though. All of the guidance said that it was dangerous to co sleep. I was torn between needing to sleep and worrying that I was doing the wrong thing. A few more nights of zero sleep however and I was turning to trusty google yet again! I needed to see if we could co sleep safely. There was no way I was going to do it full time but on those nights that I really needed to I wanted to be sure that it could be safe.

To my surprise I found lots of articles promoting the benefits of co sleeping. Each one suggesting that co sleeping is extremely common in non western cultures and that it can promote bonding. There were some common sense suggestions such as keep baby away from pillows, let them sleep on top of the covers with their own blanket and never share a bed with baby if you have been smoking, drinking alcohol or taking drugs (as if you would!!).

I’m still not entirely sold on the idea and I certainly couldn’t do it full time (especially as baby boy is such a wriggler in his sleep) but on those nights when sleep is hard to come by I am happier knowing that he can come into bed with us and we can all sleep well. Maybe I’m making a rod for my own back but it works for us and to be honest that’s good enough for me.

What are your opinions on co sleeping?